The legendary designer Alexander McQueen dropped out of school aged 16 and managed to find work on Savile Row. McQueen began by working at the tailoring house Anderson and Sheppard, and then moved on to Gieves and Hawkes. ”Alexander McQueen joined here in 1984 or 1985. He didn’t have an introduction I don’t think, he just came in to apply in person. The firm’s policy at the time was to take young people who had not been to college as they were easier to train. Sixteen was a typical age for apprentices joining the firm. It’s fair to say he was very intense in all his conversations with the other tailors and was very passionate about what he was doing”- Anderson and Sheppard employee.

Alexander McQueen decided to move on from Savile Row and pursue a career in fashion design, that we all are familliar with, and his legacy and influence in fashion continues.

The Savage Beauty exhibition at the V&A museum showcases some of the best of Mcqueen’s work. Photography is not allowed in the exhibition, but this allows you to fully immerse yourself in the experience and really appreciate the greatness right in front of your eyes- All photos where taken from Vogue.com 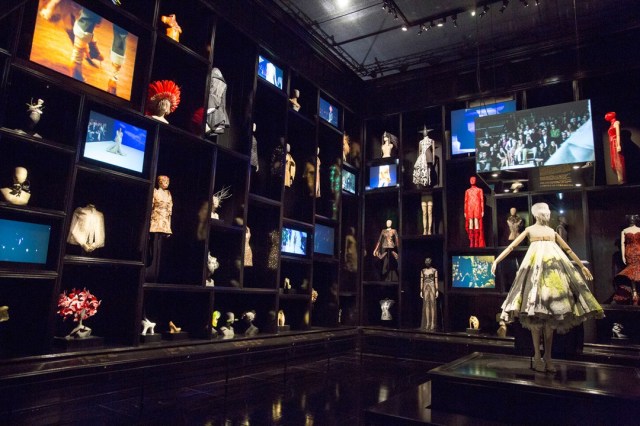 Alexander McQueen’s company decided to go back to Mcqueen’s tailoring roots, and opened up the Alexander McQueen bespoke tailoring house in 2012 on 9 Savile Row where suits are made with the highest levels of care and precision, but in the rebellious Mcqueen style that we are all familliar with.

I went went to the V&A museum to go for the Gareth Pugh talk for some research and it was absolutely incredible watch him talk about his influences and what got him to where he currently is was so inspiring and to hear what he REALLY felt about this fashion industry was very interesting. Unfortunately I was unable to take for pictures because it would be distracting. Luckily SHOWstudio documented the whole thing!

Gareth Pugh talks with Lou Stoppard at the V&A